President of the Acceleration Research Society

Kuroba Enju (黒羽 苑珠, Kuroba Enju) is the White King and the leader of the White Legion, Oscillatory Universe, as well as the president of the Acceleration Research Society. Her duel avatar is White Cosmos. She is also Kuroyukihime's Parent and real-life sister. She is the main antagonist of the series.

It has been said that she appears to be kind, but in actuality, she is very manipulative in nature. This manipulative personality is seen in an episode where she set up a meeting with the Six Kings of Pure Color to have Red Rider killed by Black Lotus, as well as what she had done to Kuroyukihime in the past according to her memory.

In 2039, the player who would be known as White Cosmos received the mysterious Brain Burst program, though it is implied that she was not one of the first-generation burst linkers known later as Originators. White Cosmos soon became an accomplished player in the Accelerated World, and it soon became clear that she was the first and only healer. The other healer that came along willingly uninstall Brain Burst due to being unable to sustain the burden of being a burst linker.[1]

As White Cosmos rose in level, she soon took part in the Ikebukuro dungeon Legion Quest, and became the Legion Master of her own Legion, which she called Oscillatory Universe. At some stage she also learned how to use the Incarnate System.

However, White Cosmos became disinterested in the game aspect of Brain Burst, and instead sought to discover more about the Accelerated World and its inner workings. Soon, she and the like-minded Black Vise and Argon Array decided to form a organisation they named as the Acceleration Research Society in order to carry out their research in secret from the rest of the burst linkers in the Accelerated World. White Cosmos soon became the leader of the Research Society, and apparently kept her Legion members unaware of her dual roles, instead leaving the running of Oscillatory Universe largely to Ivory Tower.

Sometime later, White Cosmos secretly participated in the ambush on Saffron Blossom, alongside Black Vise and Argon Array, keeping herself shrouded in a bright white light to disguise herself. Whenever Saffron Blossom was killed by the Legendary Enemy called Jormungand, White Cosmos used her healing abilities to bring Saffron back to life ahead of the 1 hour period, expediting the loss of her points. She also witnessed the birth of Chrome Disaster from Chrome Falcon. While she had kept silent until then, White Cosmos soon inquired if Vise could contain him, however, when Chrome Disaster went on a murderous rampage the trio retreated, their involvement in the affair never known to the only other survivor. The incident caused the Research Society to consider creating their own Armour of Catastrophe for their own purposes, and White Cosmos left the necessary research to Argon Array.

Eventually, White Cosmos chose to recruit her younger sister, Kuroyukihime, into the game, apparently the only person she chose to grant Brain Burst to despite her Originator-exclusive ability to recruit as many players as she liked. White Cosmos taught her sister, known in-game as Black Lotus, about the Accelerated World and how to fight, though they never took these battles seriously. While Black Lotus felt that their parent-child relationship in Burst Burst had strengthened their bond (to the point that she believed White Cosmos would always be the most important person to her and look after her in turn), White Cosmos didn't feel the same sentiment. The two sisters apparently only shared their parent-child relationship with a few trusted allies.

White Cosmos soon made it to Level 9, along with only six other players, including Black Lotus. Right after all seven player became level 9, a system announcement revealed that the only way to reach Level 10 was to defeat five other Level 9 players (the loser of the duel would lose all of their points and have Brain Burst uninstalled).

Around this time, the Acceleration Research Society began plans to recreate the Armor of Catastrophe, which would involve festering a large amount of negative incarnate from dozens of Burst Linkers and placing it into a single player. To be able to accomplish this, White Cosmos and the other ARS members realised they would need to manufacture objects that would make players who used it feed the main unit with the incarnate, and determined that Red Rider, with his Arms Creation ability, would be the ideal candidate to create such an object.

After Rider suggested a meeting between the seven Kings to discuss creating a non-aggression treaty, he came into contact with White Cosmos, revealing he had used his ability to fashion seven guns he called Seven Roads (Seven Roses in the original Japanese), which would be unable to fire when held by the Seven Kings despite there being bullets in the chambers, as a show of peace. Rider presented White Cosmos with one of the Seven Roads.

Having no interest in peace and knowing that Red Rider would never assist the Research Society with their plans, White Cosmos planned to use her sister's desire to learn about the reason for the Accelerated World's creation to manipulate Black Lotus into being an aggressor at the meeting and kill the Red King. White Cosmos invited Black Lotus into the standard duel field and fabricated a reason that Red Rider plans to force the maintenance of the Peace Treaty by giving each a gun which would decimate any attacking legion should they break the treaty. To emphasize her lie, White Cosmos pulled the trigger while aiming the Seven Road at the stage around them, and while the gun itself did not actually fire, White Cosmos used her Incarnate abilities to decimate a significant portion of the Demon City stage to make it appear as though it had been Rider's gun.

Her sister convinced and feeling that Rider intended to stagnate the Accelerated World, White Cosmos stood back and watched as Black Lotus decapitated Rider during the meeting of the Seven Kings and attempted to kill the other Kings. Unnoticed by the others, White Cosmos was able to use one of her abilities to recall Red Rider's player data as he died. While Lotus was soon forced to retreat, disband her Legion Nega Nebulus and go into hiding, White Cosmos proceeded to agree to the non-aggression treaty with the remaining Kings, in which she nor the other Kings would fight each other directly and allow their Legions to fight in their stead so that they all could maintain their acceleration abilities.

Forcing Red Rider to exist in the Accelerated World as a "ghost", White Cosmos incorporated him into the Tokyo Midtown Tower's portal and forced him to develop the primary ISS Kit. Rider was unaware it was Cosmos who was using him, but was able to figure out that it was one of the Six Kings and that Lotus had been manipulated into killing him.

What White Cosmos hadn't anticipated, however, was that Kuroyukihime accelerated on a whim some months later and found the Seven Roads in her inventory and try to fire it. When it would not, she realized the truth of Red Rider's hope to have the gun be a symbol of peace and friendship. Kuroyukihime confronted her sister in the real world, demanding that White Cosmos duel her. However, White Cosmos remained calm and openly smiled at her sister's realisation, stating that Kuroyukihime could never beat her and that she had no desire to take Brain Burst from her. Realizing this would indeed be the case, Kuroyukihime took out a box cutter and cut White Cosmos' hand, and despite it being a small wound, White Cosmos made it larger (in the English version, White Cosmos tried to take the knife off of Kuroyukihime but accidentally cut herself). Because the incident was captured on the cameras of their family's home net, Kuroyukihime was exiled from her family home under the concerns of mental health issues, and White Cosmos would have no contact with her younger sister for the next two years.

White Cosmos' real life appearance is currently unknown. However, Kuroyukihime described her as being far more beautiful than even herself.

While the members of the reformed Nega Nebulas were discussing the possibility of bring Chiyuri Kurashima into Brain Burst, Kuroyukihime noted the importance of the parent-child relationship, leading Haruyuki Arita to wonder who her parent was. When he later asked Kuroyukihime about it, she refused to reveal her parent's identity, fearing what would happen if the two met.

After the Acceleration Research Society disrupted the Hermes Cord Race to show the entirety of the gathered Burst Linkers the powers of the Incarnate System - as well as the unexpected emergence of the Sixth Chrome Disaster from Silver Crow - the other Kings organized a new meeting to discuss how to proceed. Silver Crow wondered if White Cosmos, the only King he had not yet seen himself, would appear, however Black Lotus informed him that Cosmos would not appear herself and instead send a proxy; indeed Ivory Tower went to the meeting in her stead.

Later, Shinomiya Utai began mentioning the one who had betrayed Kuroyukihime until she was silenced, suggesting that Kuroyukihime may have informed some of her old Legion members of what White Cosmos had done.

When Silver Crow and Ardor Maiden accidentally entered the Imperial Palace, the Armor of Catastrophe within the former caused Silver Crow to recall some of Chrome Falcon's past, including White Cosmos's words after Falcon transformed into Chrome Disaster. However the details were hard for Silver Crow to recall after the dream was over.

At another meeting between the Kings to confirm the Armor of Catastrophe had been removed from Silver Crow and discuss the plague of ISS Kits, Silver Crow again wondered if the White King might appear, but when she did not he considered the possibility that she might simply be shy.

After Nega Nebulus discovered that an ISS Kit they had obtained contained Red Rider's emblem, Kuroyukihime felt compelled to reveal to Haruyuki the relationship between her and White Cosmos.

White Cosmos is a pure white Duel Avatar who looks like an angelic princess. She is a slender feminine avatar with a dress and high heels, and her forearms are encased in armor which look like elbow-length gloves. Her head is also covered in blonde liquid metal designed to resemble hair. She is the only Duel Avatar with a healing ability, if one discounts Lime Bell's Citron Call.

She is also the most powerful user of destructive incarnation in the Accelerated World, able to level a third of a combat area in 30 seconds. Black Lotus believed that, even with the Red King Scarlet Rain, Nega Nebulus' executive team, Blood Leopard, as well as 4 other mid-level players at her side, they would still lose.[2]

Her Child is Black Lotus, her younger sister. 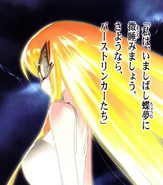