Manganese Blade is confident and serious in the Accelerated World, but often acts rather childish in the real life. She is also very loyal to Blue Knight and has a crush on him.[citation needed]

From the time when they were infants, Yuki Takanouchi and her twin sister, Koto Takanouchi looked completely identical. Thus, in order to tell them apart, their mother gave them different colored Neurolinkers, one red, one white. [1]

Starting from preschool, Koto and Yuki began playing a prank where they frequently traded Neurolinkers and pretended to be the other. Nobody, not even their own parents, noticed their regular pranks.

When the two twins began elementary school, they decided to stop the prank they had been playing for the past three years, since they were going to be in separate classes. However, at this point, they realized that they had forgotten who was originally who. They began to panic, feeling as if their own self-identity had been annihilated. In the end, they decided to pick randomly who was going to be Koto and who was going to be Yuki. Furthermore, they decided than whoever was Koto would always wear their hair in pigtails, while Yuki would wear a ponytail.

Starting from this point, the two girls began to have identity anxiety. Deep down, Koto and Yuki were constantly assaulted by the fear that each girl was not who she thought she was, slowly destroying their sense of self. Every time a classmate called out “Koto” or “Yuki”, they would wonder if they were really who their classmates were calling. Slowly, this fear led the twins to isolate themselves from their peers. [2]

One day, the Brain Burst 2039 program was given to them by Blue Knight. In the Brain Burst game, the two were given the unique names “Cobalt Blade” and “Manganese Blade”. Finally, the two had a way of definitively defining themselves. From here on, Koto and Yuki Takanouchi, now “Cobalt Blade” and “Manganese Blade” rose through the ranks of the Blue Legion, Leonids, to become the close aids of the Blue King known as “Dualis”.

Some time later, Sky Raker of Nega Nebulus hung both Cobalt and Manganese Blade from the top of the Tokyo Government Office, which seriously humiliated them. [3] Because of this incident, Sky Raker now ranks number one on the “enemy list” of the two sisters, with Graphite Edge in second place.[4]

Yuki Takanouchi is of an average height. Like her twin, Koto Takanouchi, she has a large bust and long, black hair. However, unlike Koto, who wears her hair in pigtails, Koto’s hair is tied in a ponytail fashion.[5]

Return of the Black Snow Princess (Side Story)

Manganese Blade and Cobalt Blade are seen beating up Cyan Pile after hearing his intentions to leave the Blue Legion and join Nega Nebulus, but she and Cobalt are later stopped by the Blue King who allows the latter to do as he wishes for reasons unknown.

Manganese Blade's appearance is based on a samurai. Her body is mostly blue in tune with her legion. She has a typical samurai armor set including the helmet which also has only one ponytail extending out of it, shoulder guards and hip guards. She also has a blade which she usually has attached to her waist. 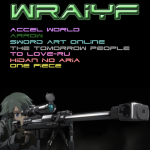