Snow Fairy (スノー・フェアリー, Sunō Fearī) is a member of the White Legion, Oscillatory Universe, where she holds the high rank of the second of the Seven Dwarfs.

Snow Fairy is one of the oldest and most experienced Burst Linkers present in the Accelerated World, possessing deep knowledge of the game and having great expertise in the Highest Level.

Snow Fairy was formerly a collaborator, meaning that she had once possessed a connection to a high-level Enemy (similar to what Metatron is) from whom she learned to navigate the Highest Level. However, her partnered Enemy disappeared at some point in time, and Fairy was left alone.[2]

She is currently one of the most trusted associates of the White King, White Cosmos, and is intertwined with the activities of the Acceleration Research Society.

Snow Fairy possesses a demeanor similar to that of the White King, White Cosmos, having the same innocent, nonchalant demeanor. However, she is somewhat more condescending, passing off the Acceleration Research Society veterans (Black Vise and Argon Array) as simple amateurs.

Her voice is described as being that of a young girl’s, sweet and sour with a slight lisp, noted to resemble sweet syrup spilt on snow.[3][4]

Snow Fairy intruded into the Highest Level where Silver Crow and Metatron were discussing the peculiar Territory Battle against the White Legion that was happening at the time. After giving a brief introduction, she attempted to sever the connection between the two. However, in attempting to do so, she was immediately repelled by Metatron. After this brief confrontation, the three exited the Highest Level.

Returning to the Territory Battle, which had been turned into the Unlimited Neutral Field by Orchid Oracle, Snow Fairy surrounded the group of Nega Nebulus legionaries with a shower of Incarnate snow, creating a barrier of extremely cold air around them. In their brief moment of hesitation, Glacier Behemoth enclosed them within a thick ice wall with his “Last Glacial Period”, and Fairy followed up with her large-scale Incarnate attack “Brinicle”. Using this extremely powerful combination attack, the two managed to kill all of the Nega Nebulus members with the exception of Silver Crow, who had managed to escape.

In the battle that occurred an hour later after the legionnaires had respawned, Snow Fairy was killed by a combination of Black Lotus’ “Starburst Stream” and Scarlet Rain’s “Radiant Burst”.

While Silver Crow was spectating the assault on Genbu at the Imperial Palace from the Highest Level, Snow Fairy appeared unexpectedly. After a brief exchange in which she revealed her former collaborator status, she petrified him in an attempt to force him to call Metatron. However, her plan failed and Crow managed to escape from her trap.

Snow Fairy’s avatar is very short, reaching only up to Silver Crow’s chest. She has a sweet face, and wears a white dress with a large snowflake pattern on the front, as well as a sharp-pointed tiara on her head.[1]

She is one of the few Burst Linkers with the ability to access the Highest Level.[1] 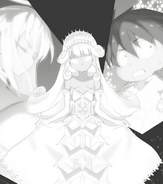 A colored version of Snow Fairy done by Fredik

Official colors of Snow Fairy with an... unfortunate background