Shihoko Nago (奈胡 志帆子, Nago Shihoko) is a female Burst Linker who was the Legion Master of Petit Paquet, which later merged with Nega Nebulus after the ISS Kit incident.

Shihoko has brown hair with two pigtails coming out of the back. She is usually seen wearing her school uniform, which has a Puritan design.

Shihoko describes herself as having a very "average" look.[1]

In the real world, Shihoko is rather shy and indecisive, talking in a polite and serious tone. When asked to make decisions, she usually hesitates, unable to decide the choice that will yield the most benefit. Furthermore, she lacks self-confidence, thinking that her looks and performance are inferior to her friends Satomi Mito and Yume Yuruki.

However, while in the Accelerated World, Shihoko's personality changes drastically. Behaving the polar opposite of how she does in the real world, she acts and talks in a very prim and proper way, using very formal language and sentence structure. Although she knows that this change in personality occurs, she is unable to act in any other way within the Accelerated World.

Shihoko possesses a deep fear of being hated by others. In fact, her duel avatar, "Chocolate Puppeteer", was based off of this fear. The sweet, pleasant chocolate armor is the manifestation of Shihoko's desire to be liked.

Shihoko's network avatar is Gretel from the Grimms' fairy tales,[2] presumably the story Hansel and Gretel.

Shihoko later changed to a maid outfit with an apron.[3]

Chocolate Puppeteer, as her name suggests, is an avatar covered by chocolate-colored armor, placing her somewhere between yellow and red. Her armor also tastes like chocolate.[4] She has long hair flowing down to the left and right of her bonnet, as well as dress-shaped armor for her lower body. Her eyes glow the color of strawberry cream, according to her.[5] However, even though the avatar looks and tastes like chocolate, the armor itself is not actually chocolate. As such, it does not melt or break easily. Chocolate Puppeteer's potential is largely based on her ability to create chocolate puppets.

Her Parent is Mint Mitten, and her Child is Plum Flipper. 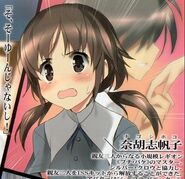 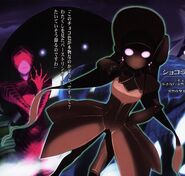 Shihoko with her friends Satomi and Yume

Shihoko with Fuko, Kuroyukihime, and Chiyuri