Akira Himi (氷見 あきら, Himi Akira),[2] also known by her Duel Avatar name Aqua Current (アクア・カレント, Akua Karento), is a Burst Linker who once worked as a bodyguard, partnering with low-level players who are low on Burst Points in return for their identities. She was also once a member of the Black Legion, Nega Nebulus. After the ISS Kit, incident she rejoined the Legion.

Akira is shown not to reveal many of her emotions but is very straightforward when she speaks to other people. Because of her information-savvy nature, she is often regarded as Nega Nebulus' intelligence specialist.

Not much information has been revealed about Akira, except that she is a bodyguard that helps level two or lower burst linkers in raising their points to a safe amount. However, in return, she records the Burst Linker's real world identity.[3]

Not long after her induction into the Accelerated World as Aqua Current, her Parent had their Brain Burst uninstalled, and their memory of it wiped. Therefore, she had to learn much about Brain Burst from someone else, that someone being Magnesium Drake. He taught her about how to use her abilities and techniques to use during battle, and they became good opponents.[2]

It is later revealed that Akira was originally a level-7 member of the element-themed executive group of Nega Nebulus known as "Elements". Akira represented the element of "Water". However, after the failed Nega Nebulus attack on the Imperial Palace, Akira sacrificed herself to save her comrades, ending up in Infinite EK at the altar of Seiryuu, the East of the Four Gods. As a byproduct, she fell prey to Seiryuu's Level Drain and had her level reduced to one. After this incident, she left the legion to become a bodyguard known as "The One", named after her level.[2]

When Akira was young, her mother, Himi Kaoru, agreed to Mihaya's offer to become the chief pâtissier of her recently deceased father's shop. Going with her mother, Akira visited Mihaya's renovated cake shop. There, she gave the girl the Brain Burst program, becoming her "parent". Since Mihaya lived far from Shibuya, the home territory of Akira's legion Nega Nebulus, Akira advised her to instead join the nearby Red Legion known as Prominence.

After the failed Nega Nebulus attack on the Imperial Palace that had resulted in Akira being trapped in Infinite EK, she tried to erase Mihaya's memory of herself. However, the attempt failed, and the two never contacted each other again until much later.

Akira is a young girl with short, brown hair that she wears down. She has yellow eyes and wears red framed glasses. Her attire consists of a white turtleneck sweater with a gray coat on top. She has been noted to have an androgynous appearance with an air that was neither distinctly male nor female, similar to her symbol of "water".

Return of the Black Snow Princess (Side Story)[]

After Haruyuki uses most of his points to level up to level two, Taku advises him to join up with a bodyguard to raise his points. Haru goes to meet Akira when Haru accidentally trips over her and realizes that she is «Aqua Current» once he sees her bag's content. After realizing who she is, Akira decides to help Haru regardless and prepares to find opponents for the two of them. She decides to challenge a pair that is level four and three.

After entering the match, Silver Crow sees Aqua Current for the first time. Then, their opponents, Sand Duct and Nickel Doll appear. Aqua Current tells Crow that they will each take an opponent and reveals information about Nickel Doll's abilities. She then engages in a fight between Sand Duct who uses his Sand Blaster technique on her. However, she appears unaffected by it as she states that her body is composed of water rendering his technique ineffective. After regrouping with Crow, Sand Duct comments on that their teamwork is poor compared to his and Doll's. Current and Crow decide to work together. Crow is hit by Sand Duct and Nickel Doll's collaboration attack. Aqua Current then goes into the attack and is absorbing Nickel Doll's electricity stating that her body is made of pure water which acts as a perfect insulator. Silver Crow is then able to land a finishing blow to their opponents.

The match ends, and Haru regains some points. Akira then challenges Haru to a match to test him. He considers her as a friend and won't attack her which is exactly what she wanted to test and is happy that he is someone that can be relied on. However, she tells him it is too soon to know her and erases his memory of her identity with the Memory Leak ability.

Signal Fire at the Water's Edge[]

During the third battle between Silver Crow and Wolfram Cerberus, this time in a Battle Royal, Argon Array ambushed the two duelers. However, Aqua Current interfered in the nick of time, using the water of her body to refract Argon Array's lasers. This gave Haruyuki time to attack Argon Array from the back using his newly acquired skill Optical Conduction, forcing Argon Array to retreat. After this incident, Aqua Current met with Kuroyukihime and Haruyuki in the real world, thus rejoining Nega Nebulus.

Before the attack on the ISS Kit main body, Kuroyukihime deemed it necessary to first rescue Aqua Current from Infinite EK at the Castle gates. In order to dive into the Unlimited Neutral Field, Aqua Current increased her level to "four", thus ridding her of her nickname of "The One".

The members of Nega Nebulus, along with Blood Leopard and Scarlet Rain of Prominence, launched a joint attack on the East Gate of the Castle. There, Silver Crow flew Akira out from her position at Seiryuu's altar. However, one of the stray level-draining orbs started to fly towards the attacking Nega Nebulus group. However, Blood Leopard took the hit and, using all of her stored up points, safely ran to the edge of the bridge. Thus, the "Aqua Current Rescue Mission" was a success. Here, it is revealed that Aqua Current and Blood Leopard were parent and child.

The End and the Beginning[]

During the Midtown-Tower assault, Aqua Current paired up with Black Lotus, Sky Raker, and Ardor Maiden to attack the ISS Kit main body. At the forty-fifth floor of the Midtown Tower, they ran into the ghost of Red Rider. However, before the four Nega Nebulus executives could get a proper explanation, Red Rider was taken over by the ISS Kit main body and began to attack.

While Kuroyukihime attacked Rider with her blades, Aqua Current provided ranged support from the back. Aqua Current shot parts of her water armor at Rider's eyes, temporarily blinding him.

Immediately after the ISS-controlled Rider was defeated, the ghost Rider appeared once again. Finally, with the ISS Kit temporarily subdued, Rider began to explain the situation. After Rider was killed by Black Lotus at the meeting two years ago, a certain Burst Linker had created a copy of Rider's soul. Two years later, the Acceleration Research Society loaded the Rider-copy into the ISS Kit main body, which took the form of a giant eyeball. Then, using Rider's "Arms Creation" ability, the ARS began to mass-produce the ISS Kits. Rider then explains that if the ISS Kit main-body was destroyed, then he could activate the safety on the distributed ISS Kits, thus disabling their function. At this point, Rider's time ran out and the ISS Kit main body re-activated. However, before Rider disappeared, he asked the Nega Nebulus legionnaires to thank the second Red King for him.

After the short conversation with Red Rider, the ISS main body re-activated and began to attack the four Burst Linkers. In the battle against the ISS Kit main body that followed, Aqua Current played a large role in destroying the main body's core using her "Phase Trans - Keen" Incarnate ability. She also used her other Incarnate defense ability, "Phase Trans - Adamant", to defend against the main-body's attacks. In cooperation with Black Lotus, Sky Raker, and Ardor Maiden, they succeeded in defeating the ISS Kit main body.

After the ISS Kit main body was defeated, Red Rider enabled the safety function on all of the distributed ISS Kits, thus removing the Kits from the Accelerated World.

Aqua Current took part in the assault against the Oscillatory Universe during the Territories for Minato III. She was also a part of the group that was trapped in Glacier Behemoth's "Last Glacial Period" and Snow Fairy's "Brinicle".

Akira's virtual character design is an otter with brown and white fur. It has the same red framed glasses that she wears in real life and also wears a small red tie.

Akira's Duel Avatar is a female humanoid surrounded in a large reservoir of constantly flowing water. The water flows from her head down her body and towards the ends of her limbs, where they wrap back around upwards to form pigtails. Her eyes glow blue.

However, in certain stages, her appearance may change due to one of her abilities. In the Ice stage, she may form ice weapons and ice armor, while in the Volcano stage, her armor may emit steam.[1] 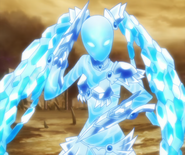