An Enhanced Armament (, Enhansuto Āmamento) is a piece of equipment or weapon that a Duel Avatar can obtain to use in Brain Burst duels. The most powerful Enhanced Armaments are known as the Seven Arcs, of which some are currently owned by the Six Kings of Pure Color.

While some Enhanced Armaments spawn with the Duel Avatar, such as Cyan Pile's Pile Driver, others have to be equipped, either by using the voice command "Equip", followed by the name of the Armament, or by manipulating the menu. If equipped via the menu, the usual audiovisual effects will not appear.[1]

However, exceptions exist. If an Enhanced Armament is granted by an Enemy via a link to the Duel Avatar, it may be equipped by mentally using the voice command, which allows these Armaments to be equipped without alerting the opponent.[1]

There are four main ways of obtaining an Enhanced Armament: 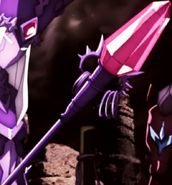 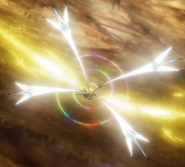