256
Elements is the tenth volume, and first side-story collection of the Accel World light novel series by Reki Kawahara. It was released on December 10, 2011 in Japan.

Elements is the first, and so far, only side-story volume in the series. It has three stories:

The bulk of the book is composed of the first two stories.

The Sound of Water on a Distant Day[]

A few weeks after the events of "Kuroyukihime's Return", Haruyuki and Takumu team up in tag-team matches. After winning several duels, Haruyuki total Burst Point sum rises to 308, enough to reach Level 2. Without thinking, Haruyuki presses the confirmation button, draining him of three hundred points and leaving him a mere eight remaining Burst Points.

In the real world, the panicking Takumu rushes to Haruyuki’s location and pulls off his Neurolinker. Trembling, Takumu begins to apologize for not warning Haruyuki about the level-up point reduction. He then suggests for them to go to Haruyuki’s house to discuss the situation in more detail.

Arriving at Haruyuki’s room, Takumu offers for Haruyuki to take half of his remaining points through Direct Connect Duels. Haruyuki stubbornly refuses, remembering how Kuroyukihime had never asked for him to share points even after her 99% point-reduction through Physical Full Burst. Insisting on finding another way, Haruyuki repeatedly declines Takumu’s offer.

Suddenly, Takumu is struck by an alternative method to restore Haruyuki’s points: to hire a Bouncer. Takumu explains that a certain Burst Linker by the name of Aqua Current helped guard low-point Burst Linkers on their journey to regain their points. This mysterious bouncer had a few quirks: they only helped Burst Linkers who were no higher than level 2, and they themselves were only level 1. In spite of their low level, the Bouncer has never failed to protect a client. However, in return for their service, they demanded the Burst Linker’s real-life information as compensation.

That night, Haruyuki contacted the mysterious Aqua Current. The Bouncer accepted, designating the café of a bookstore as the meeting place. As per the instructions, Haruyuki entered the café alone the next day. Sitting down at the specified table, Haruyuki finds a tablet with the words “Input Name” written on it. Inputting his name as “Silver Crow”, the tablet suddenly takes a photograph of his face, thus tracking his real life information. After accepting the payment, the tablet instructs him to wait until 13:40. 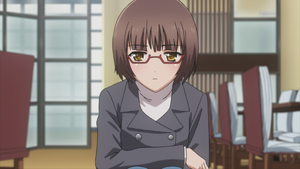 While waiting, Haruyuki decides to use the restroom. However, on the way there, he accidentally trips and crashes into an androgynous girl with red glasses. Apologizing, Haruyuki tries to hand her bag back to her, but accidentally pours out its contents. Recognizing Aqua Current’s tablet among the items, Haruyuki realizes that the girl he had tripped into was Aqua Current’s real-life identity. Giving up on concealing her identity, the girl leads Haruyuki to the predesignated table to complete their mission.

When they arrive at the table, Aqua Current hands Haruyuki a Direct Connect Cable. Talking through the cable, she questions whether he was a mastermind who had intentionally tripped to expose her identity, or simply a clumsy birdbrain. Replying that it was the latter, Haruyuki explains how he had managed to reduce himself to a mere eight points in an attempt to prove himself. Believing him, Aqua Current instructs him to call her “Karen”.

Quickly getting down to business, she suggests that they register as tag-team partners and challenge another team. When they both arrive in the Initial Acceleration Space, Haruyuki notices that Aqua Current’s network avatar is an otter with red-rimmed glasses. Aqua Current quickly selects two opponents of levels three and four, explaining that if they were to lose, Haruyuki would not suffer total point-loss. Without further delay, the two entered the duel as a tag-team. 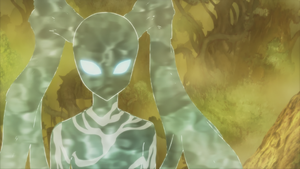 Arriving in the duel field, Haruyuki examines Aqua Current’s duel avatar, which was the strangest he had ever seen. The amorphous avatar was completely covered by a layer of flowing water. Ignoring Haruyuki’s stares, Aqua Current suggests that they go meet their opponents, who went by the names of Sand Duct and Nickel Doll.

Suddenly, their aforementioned opponents burst through the “Primeval Forest” stage. After briefly greeting them, Sand Duct activates his special attack “Sand Blast”. However, Aqua Current simply absorbs the sand particles into her armor of water, calmly explaining that she was immune to particle attacks. After shooting the sand particles back at Sand Duct, she leads Sand Duct away, leaving Nickel Doll to Haruyuki.

Charging towards her, Haruyuki attempts to use his special attack “Headbutt”. However, Nickel Doll counters with a shock of electricity, repelling him backwards. After a couple of quick exchanges, both are thrown into the poisonous swamps dotting the map. Haruyuki realizes that this situation was tilted towards his advantage, as his silver armor was resistant to poison. However, Nickel Doll thrusts her hands into the super-conductive swamp water and activates her special move “Anode-Cathode”. Victoriously exclaiming that silver was the best electrical conductor among all metals, she continues to pulse electricity into Silver Crow’s avatar body.

At this point, Haruyuki’s special ability gauge was also almost fully charged, and he flies upwards to escape the electrical field. Chaining this into a high-altitude dive kick, he takes out a massive portion of Nickel Doll’s health gauge. However, before she could be killed by terrain impact, she was caught by her partner, Sand Duct. Likewise, Aqua Current also returned back to Haruyuki’s side. 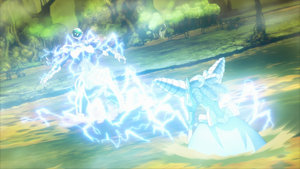 Nickel Doll and Sand Duct begin their combination attack, with Sand Duct using his “Turbo Molecular” in combination with Nickel Doll’s “Anode-Cathode”, creating a high-voltage vacuum. Sucked into the cloud of electricity, Haruyuki almost loses all of his HP. However, Aqua Current interferes, using her water armor to insulate the electricity. Calmly explaining the phenomenon to the shocked Nickel Doll, she states that pure water with no impurities is a perfect insulator. With the opponent’s combination attack nullified, Haruyuki and Aqua Current go on to win the duel

After winning four straight duels with Aqua Current, Haruyuki regains seventy Burst Points, returning to a safe amount. However, as Haruyuki thanks her, Aqua Current suddenly accelerates once again, challenging him to a duel. She explains to the shocked Haruyuki that she planned to take all of his remaining Burst Points as extra payment. However, even though she encourages Haruyuki to protect his life in a duel, he stubbornly refuses to fight her. He states that he had always believed that Aqua Current was a good person, and that she would never take all of his points.

Hearing Haruyuki’s sincere exclamation, Aqua Current steps backward and explains that what she had said previously was a lie. As Haruyuki had discovered her true identity, she simply wanted to threaten him a bit. Hinting toward her past, Aqua Current explains that she had also had friends long ago. But due to a certain incident, her Legion broke up, and she was left alone ever since. However, she still believes that one day, her broken Legion would rise back up from its ashes. Turning towards Haruyuki, she explains that she still had to collect the extra payment: his memories of her. After stating that it was too early for the “Elements” to interfere, she uses her Incarnate Skill “Memory Leak” to suppress Haruyuki’s memories of her.

Haruyuki wakes up at the empty table, remembering that his points were restored. However, his memories of Aqua Current were still suppressed. Walking out the door, he passes a girl with red rimmed glasses, and hears the trickling of water. Brushing it off as his imagination, he runs off to tell Takumu about the successful operation.

Roar of the Sea at the Ends of the Earth[]

In Okinawa, Kuroyukihime is on her school trip with her friend Megumi. As the two go souvenir shopping for each other, Kuroyukihime is approached by two local Burst Linkers, Ruka Asato and Itosu Mana, who ask her to help their master fight against a monster that is plaguing their Accel community. The discussion causes Kuroyukihime to lose track of time and forget to buy Megumi a present, which upsets her. Kuroyukihime apologises to Megumi by telling her that, since discovering Brain Burst seven years ago, she is the one who kept her tied to the real world. The next day, Kuroyukihime enters the Accelerated World with Ruka and Itosu to meet up with their master, who turns out to be an old acquaintance of Kuroyukihime's, Crimson Kingbolt.

Kuroyukihime is reunited with Crimson Kingbolt, aka "Crikin", a Burst Linker who moved from Tokyo to Okinawa after his parents divorced. Just then, they are surprised by the mysterious threat, revealed to be a Burst Linker named Sulfur Pot, who has the power to tame "enemies". When it is mentioned that Sulfur Pot doesn't appear on the challenge list, Kuroyukihime realizes that he's from Tokyo, using a backdoor program to dive into Okinawa. As they fight, in the real world, Megumi finds Kuroyukihime, Ruka and Mana's bodies slumbering while linked up. As she reached to disconnect Kuroyukihime, she sees a vision of her younger self, urging her not to do it. Megumi then spots a spare cable and plugs into the Accelerated World. Her avatar, «Orchid Oracle», changes the landscape to an ocean, giving Kuroyukihime and her allies an advantage against Sulfur Pot. After severing control of his mount, the enemy then devours him. Kingbolt then gives Kuroyukihime the Enhanced Armament that Sulfur Pot used to control the enemy, Mystical Reins, figuring she may use it one day. As Kuroyukihime departs Okinawa, Ruka and Mana see her off. Kingbolt then sends her message informing her that the trail on Sulfur Pot has gone cold. Kuroyukihime can then only wonder about the mysterious faction Sulfur Pot belongs to.

Kirigaya Kazuto is recruited by Takeru Higa to test out the unnamed 4th generation FullDive equipment. Being an SAO survivor, Higa speculates that he may be able to adapt to the machine better, as the other members of the development team experienced "VR sickness" during the dive. Higa notes that the device will use his "self-image" to generate his avatar. Before diving, Higa warns him about a "ghost" the staffers claimed to have seen, then clarifies that multiple staff members saw a mysterious, indistinct figure when diving.

Kirito dives as his Sword Art Online avatar, equipped with his Blackwrym Coat, as well as Elucidator and Dark Repulser. He finds himself in a barren, dilapidated city not unlike modern Tokyo. He notices Silver Crow and studies him with guarded curiosity. He surmises the setting is a futuristic fighting game and tries to question Silver Crow. However, neither can hear one another. When Silver Crow attempts to make a move to close the distance, Kirito panics and draws his weapon. He concludes that when the duel concludes, he will be ejected from the stage, and decides to give the battle his all.

After a fierce struggle utilizing sword skills and martial arts, Kirito draws Dark Repulser. During the struggle, he notes the simulated pain is on a level illegal in modern-day VR games. When the battle reaches its climax, Kirito and Silver Crow and both disconnected before a deciding blow can be struck, and both are forced to consider it a draw.

Kazuto then tells Higa about the duel, but he doesn't believe him. Any other attempts to re-visit ends in failure, and anyone diving simply lands in the pre-prepared environment. Kazuto speculates that the machine was 'satisfied' after the duel, and has therefore 'fixed' itself.